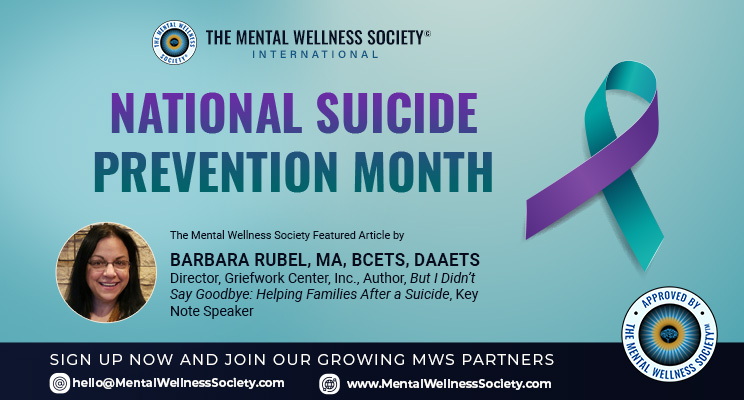 If I were to ask you if you have the tools to prevent a suicide, what would you tell me? My dad died by suicide while I was in the hospital awaiting the birth of triplets. I was one of 135 people affected for every death by suicide. As a suicide loss survivor, I focus on suicide postvention and ways to provide support after a suicide. I realize that postvention IS prevention. This is National Suicide Prevention month, and I have watched many webinars on suicide prevention. I think the most surprising tidbit woven through the webinars is the problem of suicide and opioids. Recent studies show that a large portion of overdoses are suicides. Opioids account for 1 out of 5 suicide deaths. Also, the risk of opioid overdose among veterans is double the risk for non-veterans.

During the pandemic, I listened as the media mentioned how suicide was on the rise. However, the suicide prevention webinars and the research prove otherwise. In fact, the Lancet journal study of 21 countries including Italy showed no increase in the suicide rate in 2020 (number of deaths for leading causes of death, US 2015-2020). Also, new data from JAMA (Journal of the American Medical Association) shows a 2% decrease for the first time in two years. With that said, the other day, I watched Thomas Joiner’s webinar, Why People Die by Suicide: What the Last 20 Years of Research Has Shown Us. He noted that the rate of suicide is going up among African Americans, not whites.

There were many webinars on suicide prevention this month and I want to briefly review some of the ones that struck a chord in me. First, I watched a webinar presented by Eboni Webb, PsyD. Eboni talked about managing suicidality with high-crisis DBT clients and how emotional vulnerability can come from attachment issues, loss, and trauma. Excessive cortisol effects neuron death and suppression of the immune system. The content focused on the amygdala and the fight or flight response. What I got out of the webinar is that we need to understand what happens during a stress response, emotional dysregulation, and ways to reduce suicidal urges. Eboni spoke about increasing oxytocin without problem behaviors by praying, holding a baby, laughing, distraction, or mindful breathing. Like the other webinars, Eboni focused on the essentials of safety assessment and having a safety plan. Eboni can be reached at ewebb@thevillageofkairos.com

I also watched a webinar presented by Kelly Posner Gerstenhaber, PhD, who maintains that you can reduce suicide, liability, and workload in healthcare and beyond with the Columbia Protocol. The reason why people don’t get the life-saving care that they need is due to stigma and misunderstanding. Kelly noted that men seek less treatment, and until 2010, pilots were banned from flying on antidepressants, causing many pilots to lie about or ignore signs of depression.  Kelly also mentioned normalizing screening and reducing stigma in the US army. Kelly can be reached at Kelly.posner@nyspi.columbia.edu. If you want more information about the Columbia Protocol, go to www.cssrs.columbia.edu

I learned much in the webinar presented by Kathryn Gordon, PhD, who talked about suicide thoughts that just won’t go away. Kathryn maintains that you must help your patient create a plan for safety and that they must know the signs that they are in a crisis (e.g., insomnia, agitated). They also need a reason for living, people to contact to support them, and ways to keep themself safe (e.g., remove medications-could overdose). Kathryn also talked about needing to know how to rapidly reduce the emotional pain (e.g., hot shower, art, teas, hug, play music) to evoke positive feelings. Your patients should have emergency numbers and crisis locations at hand. Furthermore, they need to foster hope and cultivate meaning by aligning their actions with what they value. For more information on Kathryn’s work www.kathrynhgordon.com

My favorite webinar was presented by Stacey Freedental, PhD, LCSW, Helping the Suicide Person: A Clinical Toolbox. Her presentation focused on joining with the suicidal client, inspiring hope and problem solving. Stacey also talked about challenging vs. changing a suicidal thought, and reinforcing gains (e.g., review recent suicidal crisis using new skills). Know what to say during a narrative interview. For instance, “Could you tell me how you got to the point that you wanted to kill yourself?” Attend to psychological pain, “How would you describe your mental pain?” Teach your patient a grounding exercise using their 5 senses. Look for unmet needs (e.g., belongingness, autonomy, and competence). Focus on safety planning. Explore their reasons for living and go over an unfinished business list. Her takeaways: focus on problems killing themselves would solve, use problem-solving skills, challenge suicidal thoughts and thoughts that contribute to suicide ideation, and use CBT to help challenge those thoughts. Stacy asks, “Imagine you become suicidal down the road. What would you like to say to your future self?”

All things considered, I realize that it is imperative for clinicians to learn about suicide prevention, intervention, and postvention. As a keynote speaker who talks about compassion fatigue and vicarious trauma in helping professionals, I realize that working with suicidal patients is stressful. However, what is more stressful is their taking their life. For that reason, all helping professionals need to learn about suicide prevention. Years ago, at an American Association of Suicidology conference, I attended a breakout given my Ed Shneidman. He said, “Where do you hurt? And “How can I help you?” I think that is a very good place to start.

Watch a few of Barbara Rubel’s Podcast and Videos 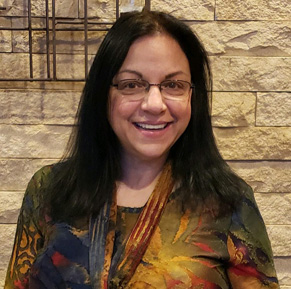 Barbara Rubel, MA, BCETS, DAAETS is an author, But I Didn’t Say Goodbye: Helping Families After a Suicide, and keynote speaker on compassion fatigue and vicarious trauma. Her website is www.griefworkcenter.com 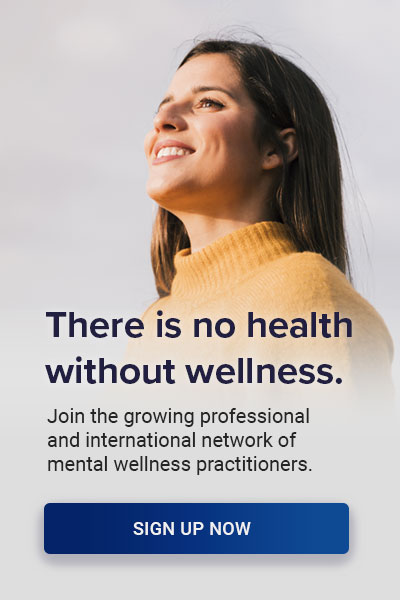 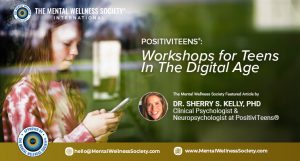 PositiviTeens®: Workshops for Teens In The Digital Age

Today’s teens are more isolated and marginalized than ever before, even though they may seem “connected” through the internet and social media. Why then are teens experiencing such high rates of depression? Why are mood disorders becoming so commonly seen in the high school and college-age populations? How do we raise our children to be positive in such a negative world? Can we teach teens the skills and mindset to be happy? 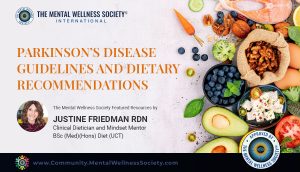 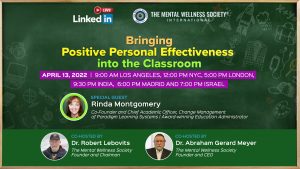 Here’s the replay of our last LinkedIn live as we 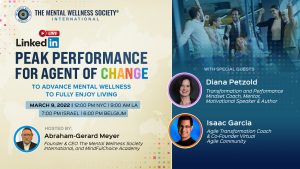 Peak Performance for Agent of Change to Advance Mental Wellness

In this live, we talked about “Peak Performance for Agent 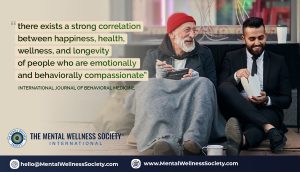 Generally, the best way to develop Stress’ Resilience is through 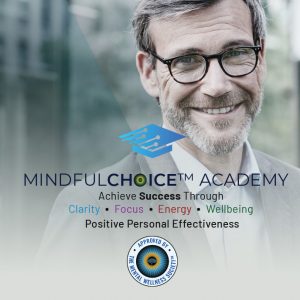 Personal effectiveness is a branch of the Personal Development movement

Why is exercise more important now than ever? Together with 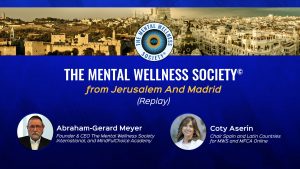 The Mental Wellness Society Live from Jerusalem And Madrid

The Mental Wellness Society Live from Jerusalem And Madrid With 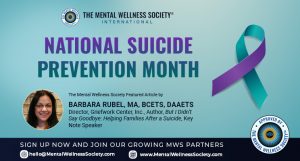 If I were to ask you if you have the 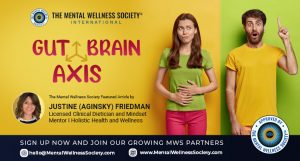 Researchers are looking at the dynamic that exists between the 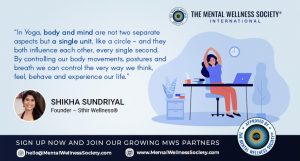 This #InternationalYogaDay, we celebrate the unity of mind, body, and 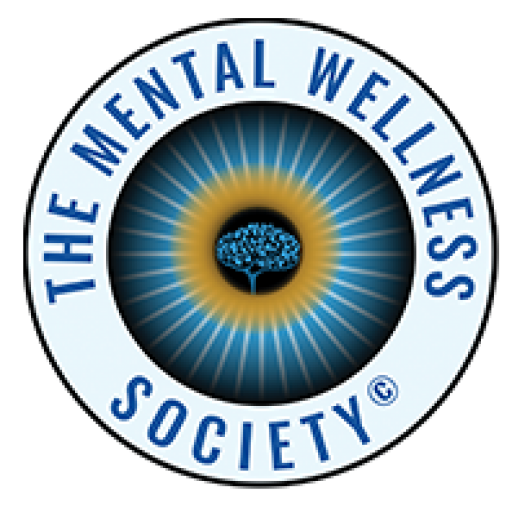 Sign Up Now and Join Our Growing MWS Partners